A couple called us regarding window tinting for their home. They live in a golf community where their home backs up to one of the fairway greens. They felt like they lived in a fishbowl.  They had glass on the backside of their house and golfers could look into their windows when they were playing nearby their home. They wanted a window film that would let in plenty of light but give them privacy from players.

After the window film was installed, golfers playing near the rear of their home could not see into the windows but the customer could see them with no problem. This gave them the privacy they were looking for and the film also reduced the amount of heat coming into the back of their
home. We can help you with all your window tinting needs like we have helped thousands of window tinting customers in Northwest Florida. 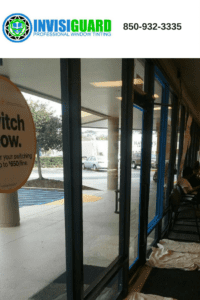 Learn more about our services:

Our window films enhance your view by reducing annoying glare without making it seem dark in your home. You’ll be more comfortable in all areas of your home no matter where the sun is shining. At the same time, window film is aesthetically pleasing to the exterior of your home while creating the level of privacy you desire.

It’s no secret to building owners that too much sun entering a building through windows can make for an uncomfortable work environment. With window film, you can regulate the temperature within the building and increase the comfort level for your employees. Our films also carry a manufacturer’s warranty.

InvisiGuard Window Tinting installs a thin, transparent protective film that is a barrier against window damage. Our safety window film can help reduce damage and likelihood of injury from flying glass in the event of impact.

We also serve the following communities around Warrington including: